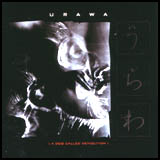 ABOUT URAWA:
Urawa is a collaboration between Olivier Moreau (Imminent) and John Sellekaers (Xingu Hill).

So far, they have released two more Urawa albums: Villa Vertigo (Foton Records, 1999) and The Most Boring Thousand Years of my Life (Falling Elevators, 2002). They're also working together on the Ambre, Torsion and Myrza projects.